I'm not talking about the death kind of loss, although death can be a bummer. I'm not even talking about losing at something, even though if you've read my About Me section, you probably know I'm not too fond of that, either. No, I'm talking about losing items -- more specifically, items with sentimental value you didn't even realise they had before you lost it.

I'm going to tell you a story. (Strap yourself in.) For my eighteenth birthday a few years ago, my girlfriends bought me a whole bunch of cool stuff, including this tiny little Irish shotglass, which looked something like this: 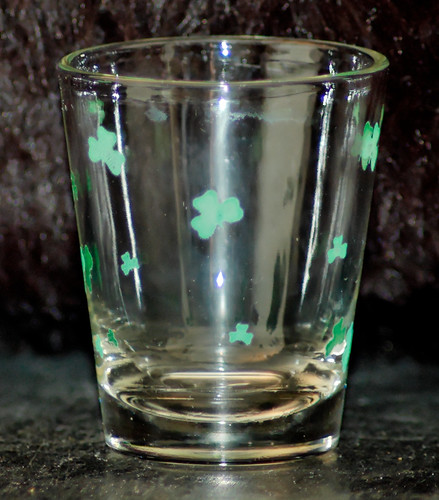 Now since I'm a gal who likes the drink, this is a pretty fitting gift from my laydeez. (As they will now be known.) And boy did I enjoy a drinkie or two with my new favourite shottie. The next month, I graduated from high school -- and after years of watching Grease was pretty disappointed that there was no carnival, nor did we leave in a flying car. But I digress.

So you've graduated from high school. What's next? Schoolies, of course -- an entire week of beach, boys and booze! We were amped, and I brought Irish Shottie because I knew I'd be using it quite a bit.

One night (it was a Thursday, but that's of very little importance), we were sitting outside our friends' tent, playing a game we like to call Eleven Before One, which is pretty self-explanatory -- eleven drinks before one. And yeah, I know, it's pretty weak, but I'm a tiny little woman -- after about three drinks, there's more alcohol than blood in me. Considering Eleven Before One is pretty much a challenge, I needed to take up that challenge and win, dammit! So Jager shots (with Irish Shottie, of course) happened. And then they happened some more, and some more, until eventually (as my laydeez tell me) I fell backwards off my chair (and nearly off the hill we were situated on) and pretty much gave myself a minor bout of alcohol posioning. Clap clap to me.

It took a call to one of my laydeez's mother (who's a nurse, and a damned fine one at that), throwing up eight times in various locations, gallons of water and being woken up every half an hour for rehydrating to keep me from dying. That's my laydeez for ya -- always cool in a crisis. Yeah, so in the past two months I'm talking about, they saved my life and bought me the world's coolest shotglass. I frickin' love these bitches.

The next morning I woke up (I wasn't even hungover or anything, but I did feel a touch queasy) and I realised I'd left Irish Shottie at the boys' campsite. Except when I went back there, I couldn't find it. And believe me, I looked. I even made one of the boys rummage through a nearby bin in case someone had cleared it away with the rubbish, but alas, Irish Shottie was gone. I never did find it, but I assume it must've been stolen by the same party that had taken one guy's camera, and the boys' pancake mix. (True story.)

I'll never forget Irish Shottie. I'd only had it for less than two months, but it meant the world to me. It had war stories to tell, it had memories attached to it. Thankfully on that trip, we headed down to the gift shop and found a replacement shottie, which not only reminds me of the big Schoolies fun, but I think there's a little bit of Irish Shottie in it, too.

Oh, and by the way, I did win Eleven Before One. So I guess something good did come out of it, even if Irish Shottie paid the ultimate price. *Wipes tear from eye* You will not be forgotten, my friend.

Firstly, to my random quote of the day:

"Life moves pretty fast. If you don't stop to look around once in a while, you could miss it." --Ferris Bueller

(This is one of my all-time favourite quotes of all time from one of my all-time favourite films of all time. It was my yearbook quote, too, except the monkey on the yearbook committee actually typed it up wrong, so it actually said, "...you could miss out." I was quite cut up about it for a while, until I accepted the fact that it did pretty much have the same sentiment -- and at least they didn't fuck it up too badly and it didn't say, "...you could miss cattle.")

Now, back to my What's Grinding My Gears post. By the way, this is pretty much where I'd like to discuss things that 'grind my gears', or that annoy me...in the way Monica from Friends annoys animals dressed as humans. (That doesn't annoy me too much, although I think Paris Hilton putting heels on her dog is going a little far.)

For some bizarre reason, there's a plethora of relatively attractive women in movies and TV shows who for some reason are constantly degraded by the other characters. Sometimes for good reason -- Patty and Selma of Simpsons fame, for example. They're pretty horrid. I get that. (Although why Homer Simpson feels like he is able to pass judgement of anyone is beyond me.)

But the laydeez I'm talking about aren't overly horrid creatures. They're not that weird. And yet, they're put down and denigrated by these other, seemingly higher-quality people. Here is a prime example of exactly what I'm talking about:


Okay, let's just get this out in the open -- Jan's weird. Yeah, alright, I'll give you that one, Rydell High students. She's an odd duck. She's a little scary. But these greasers and these teen queens are, for no apparent reason, under the impression that Jan is fat. For those of you who've never seen Grease, seek help immediately. Wait, that's not what I wanted to say, let's just try that again. For those of you who've never seen Grease, here's who this is what big fat Jan looks like: Am I the only one who doesn't see it? Do I have some sort of body dismorphia that only affects my view of other peoples' bodies? JAN'S NOT FAT! She's not even a little bit chubby. What sort of emaciated skanks has Putzie been hanging out with previously that makes him think Jan's a wide load? But fear not. Putzie also makes it clear that "there's more to you than just fat." Not a compliment. If he sees fat and there's no fat, everything else he sees in her is probably nonexistent as well. "Oh Jan, you have the greatest sense of humour, and you're so sweet and caring. And I love your gorgeous blonde hair."